The document below is an edited version of the discussion paper we put together prior to the auction of The Commodore in December 2017.

As it happens, the auction never took place as the lot was withdrawn. However it was thought that it might be informative to let those who are interested what our plans had been if we had been successful acquiring the place.

The fate of the property is now seemingly undecided, but those of us who are interested in its fate, are watching carefully for any news. Should The Commodore become available again, then we would dust down and firm up these ideas….many more suggestions have been made since we put this draft paper together.

We would be interested to hear your thoughts on these very draft notes and anyone who is able to offer further support is urged to get in touch via our contacts page.

All material ©The Commodore Trust except where another  attribution is given.. 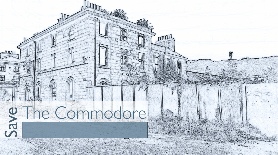 “Save The Commodore” is a group of like minded people who care about Pembroke Dock, its heritage and its people.

“The Commodore” was the former Captain Superintendent’s Residence within the Royal Dockyard, Pembroke. Lately, this once prestigious building has fallen on bad times. “Save The Commodore” has the aim of securing a positive future for the place as a community resource and transforming it into asset for the people of the Pembroke Dock. Something they can be proud of.